A pilot research program is exploring the use of electronic identification (eID) to monitor and detect underperforming Dorper breeding ewes which could ultimately improve productivity and profitability on-farm.

The trial is being run on properties in South Australia and Western Australia and is the first-time studies have looked into the effective use of eID technology on improving Dorper flock fertility.

SA business partners Jamie McTaggart and Colin Greenfield have begun the trials within their enterprise Saltbush Livestock, located on the edge of the Flinders Ranges, about 150 kilometres north of Port Augusta, to learn more about how electronic identification tags (eID) can improve the fertility of their 5000-Dorper ewe flock.

The two-year trial is supported by funding from the Primary Industries and Regions SA’s Producer Technology Groups initiative, working through the Outback Lakes SA Producer Group.

Colin said their current practice of drafting off ewes depending on whether they are visually pregnant or empty and putting them in a separate paddock to see if they are going to lamb down was an “inaccurate science”.

Jamie said the project will help identify slow breeders which need to be culled from the mob.

“Visually, it is really hard to assess whether a ewe is in the early months of pregnancy or empty and it’s also hard to tell whether a ewe in poor condition is actually a poor doer or is poor because she has just reared a couple of good quality lambs,” he said.

“Dorpers are good at giving everything to their lambs.”

Colin said the aim is to use the eID technology to collect performance data and ultimately run a more productive flock of Dorper ewes.

“We are individually tagging each ewe and every time they are in the yards, we are checking whether they are wet, dry or due to lamb soon,” Colin said.

The ewes are also weighed, condition scored and udder scored and this data is used to help make flock management decisions. 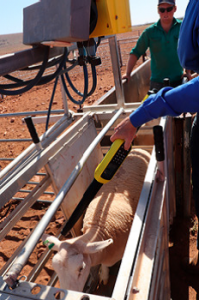 “After five months we run them back through and scan their tags and if they are dry for a second time, we can take those ewes out of the system to reduce the percentage of non-performers,” Colin said.

AC Ag Consulting principal consultant Anne Collins, who is assisting with data management during the project, said this could provide an alternative to pregnancy scanning.

She said pregnancy scanning takes the guesswork out of whether ewes are in lamb or not, however, it can be a costly exercise and it would still be necessary to individually identify each ewe.

“It is hard to get accurate scanning results in an enterprise which has the rams in year-round,” Anne said.

“If this trial provides valuable data at a reasonable cost-benefit, it may prove to be a useful alternative to pregnancy scanning in these enterprises.”

Jamie said there was not a lot of information available on the effective use of eID technology on improving Dorper flock fertility.

A Tru-Test stick reader is being used to collect the data for the project, allowing the history of the ewe to show on a screen when a tag is scanned.

Colin hopes the technology will help increase performance on-farm and reduce management costs of stock which are not performing.

“Every ewe is there to have a lamb,” he said.

“It is very possible for Dorpers to have three lambings in two years, as they are great mothers and have a great lambing percentage, sometimes up to 180 per cent.

“This technology will help reduce management and labour and will also allow us to be more organised when selling livestock in dry times.”

Click here to read the full article in the DSSA Magazine.