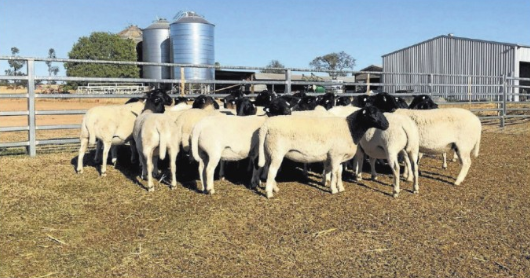 IT’S a process that’s illegal in many parts of the world, and now Dorper producers are being encouraged to cease tail docking to improve animal welfare and to limit setbacks in weight gain after lamb marking.

While it may take some time for producers to get used to the idea, it fits with the image of Dorper sheep as the ultimate low-maintenance breed.

Justin and Lorroi Kirkby, who own stud Amarula, stopped docking tails on their White Dorpers after introducing the breed to their operation in 2013, and they’ve since made the switch with Dorpers as well, leaving tails on all their Dorper sheep for the past two years. For the Kirkbys, it’s a practical decision, but one that should catch on.

“I think there’ll be a transition time to get people used to the idea of what they look like,” Mr Kirkby said.

“One of our good clients told us three or four years ago that he’d never buy a sheep with a tail, and now he’s looking at leaving the tails. He’s got 20,000 head, so it’s a massive time saver in the yards for him.”

To read the full story by Ruth Schwager for the DSSA liftout magazine, click here.