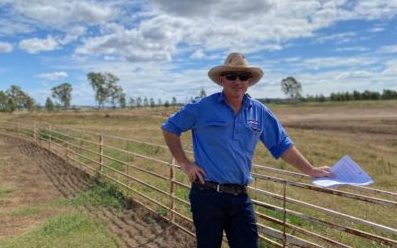 DORPERS are set to take a major role in Queensland’s Southern Downs, thanks to the development of new feedlot by Schmidt Grazing.

Grazier Stephen Schmidt said the finished project at Victoria Hill, near Allora, will be able to accommodate up to 16,200 lambs when it is completed.

The development will be staged over three phases, with an initial capacity of 6200 lambs in 31 pens planned for phase one.

The project has been helped by a $250,000 Rural Economic Development Grant from the Queensland Rural & Industry Development Authority, in recognition of its potential to benefit the local sheepmeat industry and create jobs.

“We were a Merino operation until 2009 when the dog problem forced us to run cattle,” Stephen said.

“More recently, the Queensland Feral Pest Initiative (QFPI) and local councils have built exclusion fences and we’ve personally invested $120,000 to enclose more than 52,600 hectares of our own property.

“This country is better suited to sheep than cattle and Dorpers are very well adapted to this landscape due to their ease of management and hardiness.

“We know they have good weight gain and we will be looking to source every available Dorper mob that fits in with our program.”

Click here to read the full article in the DSSA annual magazine.