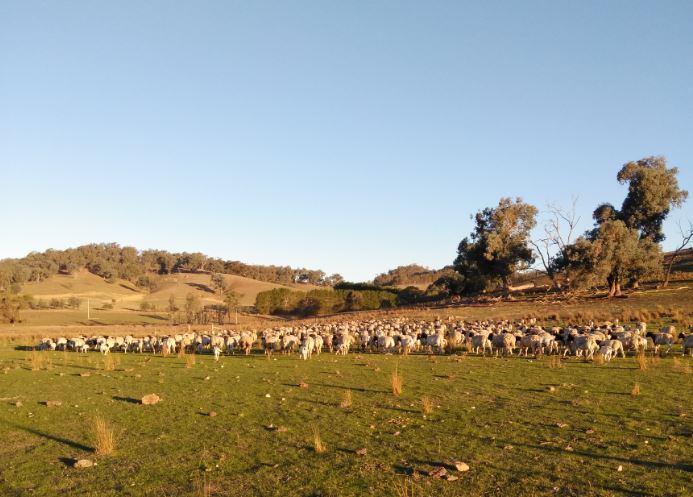 For four generations the Bussell family have run sheep in the Southern Highlands of Victoria, west of Mount Buffalo, 12 years ago they made the decision to incorporate Dorpers into their enterprise, attracted by their high fertility and maternal capabilities.

At just 25 kilometres from the snow and an elevation of 298 metres above sea level, the property has an average long-term rainfall of about 900 millimetres, meaning footrot and worms need to be considered in management of their flock.

They now run 900 Dorper ewes alongside their first-cross ewe flock and aim to grow numbers back up to 1,000 in the next few years.

Ensuring they only run the best adapted and hardiest animals is key, with feet the number one priority.

The Dorper flock has been closed for the past five years, with no outside rams used.

Two years ago, Harry culled 30 per cent of the Dorper flock “on feet alone”, which he said had made a huge difference.

“When I first went into Dorpers it was very hard to select animals from a similar climate, as no other studs had similar rainfall or conditions to where I am,” he said.

“The Dorpers I bought had to be able to adapt to conditions, the worms, the rain and the cold weather.

“But feet have been the primary concern, you need to breed sheep that have good feet. My first selection criteria is feet, anything that doesn’t suit is sold.

“Selecting and culling a large portion of the flock based purely on feet structure has really made a huge difference. I was having to trim feet every 12 months but since the cull, I haven’t had to do this.”

Harry’s second selection critieria is colour and considering he sells about 100 ewes a year into smaller breeder markets, colour is an important factor.

“I want a white body and a black head, anything with a bit of white is sold, it’s not difficult to maintain,” he said.

Located in a high rainfall zone, worms, in particular Barber’s Pole Worm and Black Scour Worm, are an important consideration when it comes to animal health and are carefully monitored with Dorpers wormed four times a year.

“Third consideration, it’s important that animals have a bit of shape to them, I want to retain the biggest and strongest animals, which also ties in with my fourth selection criteria which is worms,” he said.

“While there are rams with WEC ASBVs, but you can’t select ewes on ASBVs. So, I go with big being the best, as generally the ewes that grow the fastest have the least problems with worms.”

Click here to read the full story in the DSSA Annual Magazine.