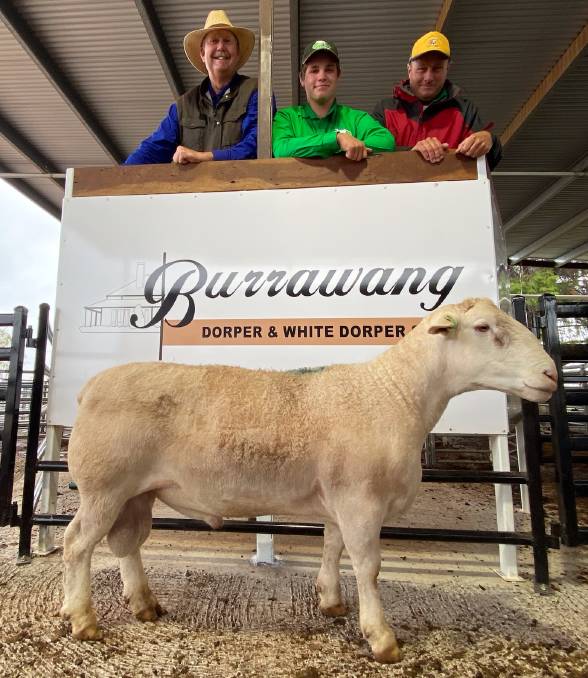 The $26,000 sale-topper was the Type 5 Burrawang Dusty, weighing 118 kilograms sold the Wald family of Hamish and Penny, and Alex and Callum, Banar, southwest of Condobolin, who recently purchased the well-known Tullinga stud flock from Robin Sanderson and Anne Coffey, Condobolin.

Hamish Wald said his family were given a wonderful opportunity to purchase the Tullinga stud flock.

“Robin and Anne have put some 15 years into this stud and have left an outstanding base for us to continue,” he said.

This 20-month-old ram displayed an eye muscle depth (EMD) of 48 millimetres and in the top 10 per cent of his peer group for early post-weaning (EP) and weaning weights.

“He’s an exceptional animal, a stand-out ram,” Mr Wald said. “he has terrific growth, muscle, a deep flank and carries it all really easily.

“He will give us that big incremental step up to take our flock forward to the next level.”

Mr Sanderson will sell his young rams this coming September.

Also returning were Mark and Julie Cullinan, Kellen Holdings, Wentworth and Pooncarie, who paid the second top price of $15,000 for Burrawang Phill, a son of the 2019 National supreme champion exhibit, Burrawang Piet and from a dam holding Gert Lotter and Burrawang bloodlines. Phill weighed 114kg at 32 months.